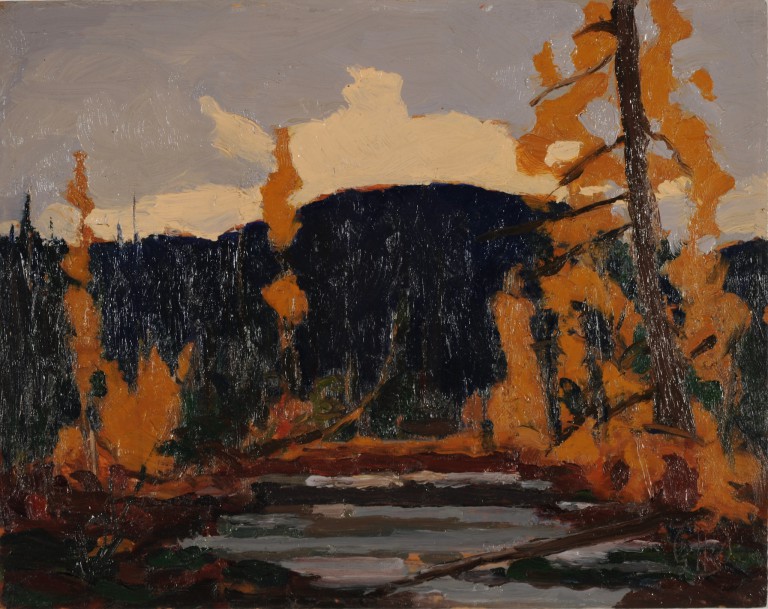 Undated and unsigned, this oil sketch is inspired by Tom Thomson’s dazzling depictions of the landscape around AlgonquinPark and Georgian Bay. Thomson’s influence is felt in the expressive brushwork and strong contrasts between autumn trees and dark hills, and in the impasto technique which layers paint thickly on the canvas surface. Thomson’s 1916 oil sketches of blazing tamarack trees may be closest to this work in terms of colour palette and subject matter. However, the untitled sketch lacks much of Thomson’s energy as well as his bold application of paint.

The influence of Tom Thomson on the Group of Seven, and on Canadian painters more generally, is inestimable. Several years after Thomson’s apparent drowning in CanoeLake, AlgonquinPark, both Lawren Harris and fellow artist David Milne had only praise for Thomson’s originality. Harris called him an undisputed member of the Group of Seven (“as vital to the movement, as much a part of its formation and development, as any other member”),1 while Milne declared, “Tom Thomson still stands as the Canadian painter, harsh, brilliant, brittle, uncouth, not only the most Canadian but most creative. How the few things of his stick in one’s mind.”2