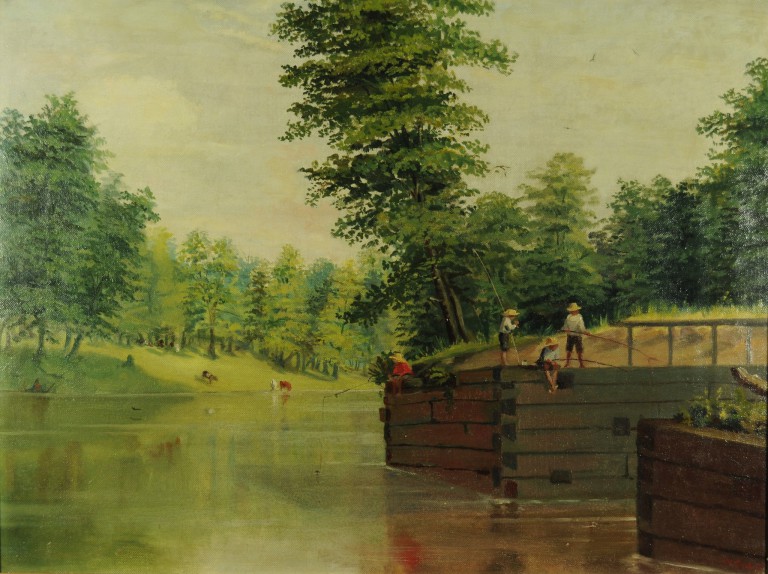 Three Boys Fishing at the Coves

Three Boys Fishing at the Coves

Completed when Paul Peel was twenty, this painting shares with Peel’s later, more well-known works an interest in childhood. Yet it distinguishes itself through its distanced, observational perspective. Here, Peel does not play the role of gentle “co-conspirator” with his viewer, as if sharing a chuckle about the naïveté of youth. The three boys fishing are part of a larger natural scene, their activity almost peripheral to the story of water, trees and sky.

Peel completed his studies at the Pennsylvania Academy of Fine Art the same year this painting was completed. During his time at the Academy (1867-1880), Peel was influenced greatly by the American teacher, painter and photographer Thomas Eakins, who encouraged the close study of nudes. Three Boys Fishing at the Coves demonstrates little of Eakins’ influence. Instead, it offers a pastoral scene more reminiscent of the early 19th-century painter John Constable, whose most famous painting, The Haywain (1821), devotes more canvas to the rural countryside than to any human figures within its domain.

Interestingly, the early 1880s found Eakins exploring similar subject matter to Peel. The results could not have been more different: both in film and on canvas, Eakins focuses his attention on the boys themselves, largely cropping out the surrounding water and trees. He also depicts the boys nude, imparting upon each a sense of personality that is absent in Peel’s work.