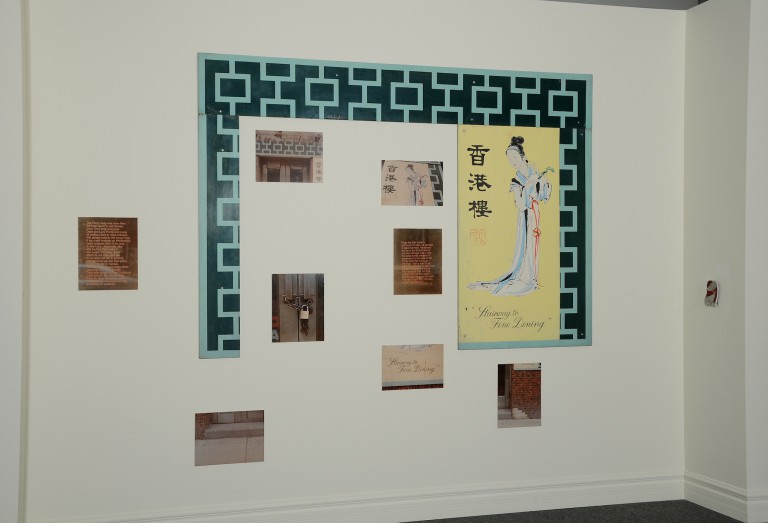 The Hong Kong, for Dave and Lucy

The Hong Kong, for Dave and Lucy

To create The Hong Kong, for Dave and Lucy (1984), Jamelie Hassan did not need to mine her rich experiences travelling and studying abroad in the Middle East, South America, Asia, or Europe. She had only to look in her own hometown of London, Ontario, where a racist attack on a local restaurant compelled her to make a moving tribute and public protest through her art. Comprised of mounted photographs and actual artifacts from the restaurant, the installation communicates on a highly personal level as well as speaking more broadly about the challenges of immigration and cultural integration.

Born of Muslim Lebanese parents and raised in a predominantly Christian, Anglo-Saxon community, Hassan has been intimately aware of these challenges all her life. Her own feelings of rootlessness have fuelled both her travels and her art. They have also given rise to works as wide-ranging as Trespassers & Captives (1999), a collaborative project at Eldon House, a London historic home in which Hassan encouraged artists to respond creatively to the building’s history, and Al Jazeera (2008), a neon sign that criticizes the effective censoring of the Arabic news network by the Canadian broadcast regulator CRTC in 2004.1

Throughout her career, Hassan has played an active role in creating opportunities for London and area artists to exhibit and to build a cohesive community. When the 20/20 Gallery closed in 1970, she and artist Dave Gordon founded the Polyglot Gallery in a local bookstore. Hassan also helped found the Forest City Gallery in 1973 and, later, the Embassy Cultural House (1983-1990). In the years since, she has continued to support Canadian artists, lecturing and exhibiting internationally. Hassan received the Governor General’s Award in Visual Arts in 2001.

1. That year, the CRTC permitted Al-Jazeera to broadcast in Canada only if cable companies who acquired the network “monitor[ed] it 24 hours a day for offensive content” (“Artist hangs reworked Al-Jazeera logo to stir censorship debate,” 22 September 2008. CBC website, http://ow.ly/qdJbI). That Hassan’s sign, a reworked logo of Al-Jazeera, says “Shame on you” in Arabic, adding another layer of pointed critique.