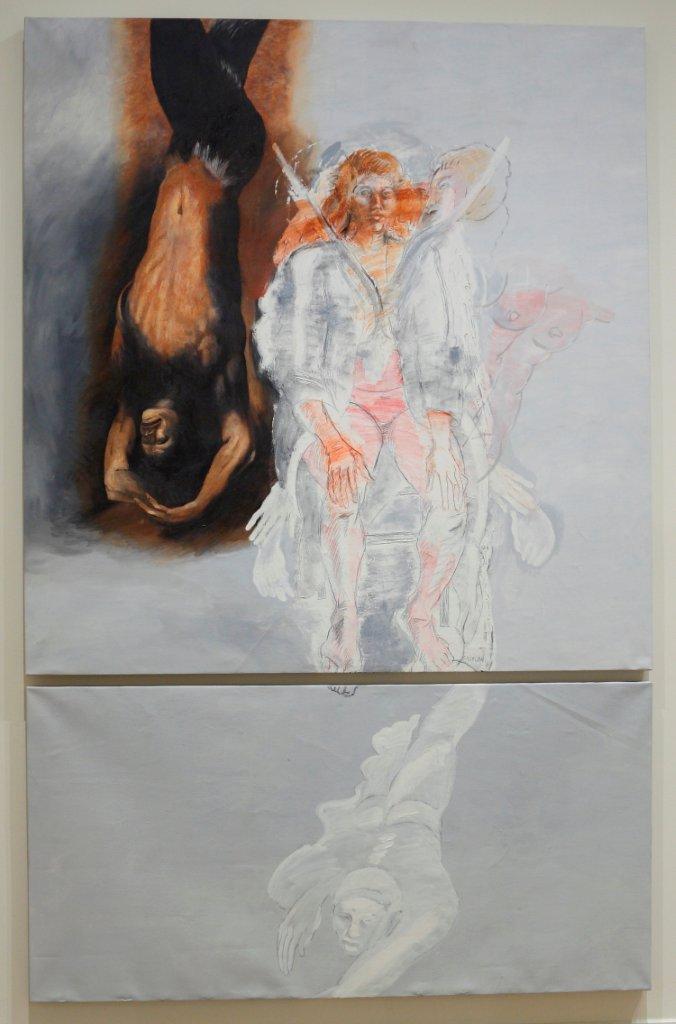 The Flaying of Marsyas

The Flaying of Marsyas

The story of the flaying of Marsyas has many variations. Ovid’s Metamorphoses (first published in 8 C.E.) presents an enduring version: the satyr Marsyas, a talented musician, found a flute discarded by the goddess Athena. Marsyas mastered the instrument and challenged the god of music, Apollo, to a musical contest. The winner could determine the loser’s fate. Marsyas lost. His brutal punishment? Being flayed alive.

For her model of Marsyas, Sheila Butler chooses Titian’s gruesome depiction of the flaying (c. 1575). While Titian’s canvas is crowded with eager onlookers and centres Marsyas in the foreground, where his suffering is impossible to ignore, Butler’s version sets a surprisingly unblemished figure alone in the upper background. The only other figure is an amalgam of sexes and bodies—perhaps part-angel, part human, part spirit. Butler seems to depict Marsyas’ tale as a transformative one: suffering begets new life. In doing so, she may be affirming a reading of this tale that was popular during the Renaissance. Marsyas, the artist, must suffer for his gifts, but through these same gifts he will be redeemed.

In the 1990s, Butler explored several well-known mythological and literary characters in her art, including Icarus and Ophelia. These tales share a scenario in which an artist-figure with special vision is punished. Butler has also explored social concerns, particularly as they relate to feminist and Aboriginal issues. A longtime educator at the University of Manitoba (1973-89) and the University of Western Ontario (1989-2004), she helped found Mentoring Artists for Women’s Art (MAWA) and has worked in Baker Lake, Nunavut to forge ties between Northern and Southern Canadian artists.