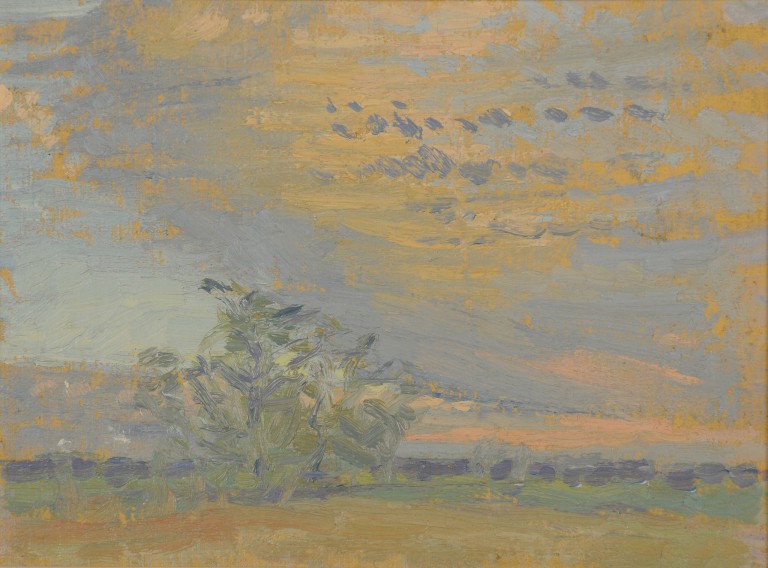 Winnipeg-born Lionel Lemoine FitzGerald likely completed this painting the year the Group of Seven was formed. Still reeling from the death of Tom Thomson in 1917 and the profound impact of the Great War, Jackson, Lismer, Harris, and friends were just beginning to resume their Northern Ontario sketching trips.

FitzGerald was not asked to join the Group of Seven until 1932, following the death of J.E.H. MacDonald. His spare and quiet style was, however, strongly admired by Lawren Harris, who praised both FitzGerald’s technical mastery and the “utter simplicity of mood and dignity of spirit”1 found in his works.

Indeed, as Prairie Sunset attests, FitzGerald’s brushwork is light and delicate where Jackson, Lismer and MacDonald would be more purposeful and strong; he creates open, impressionistic forms where Carmichael, Harris and Casson would delineate or define. Moreover, while Jackson’s version of the prairies is made up of stolid grain elevators and foothills, Fitzgerald’s is mutable, atmospheric and even otherworldly.

FitzGerald studied art in Winnipeg, Pittsburgh and New York. In 1929, he became principal of the Winnipeg School of Art, a position he held until 1947. After the Group disbanded, he helped found the Canadian Group of Painters alongside such artists as A.Y. Jackson, Fred Housser, Emily Carr and Bertram Brooker.