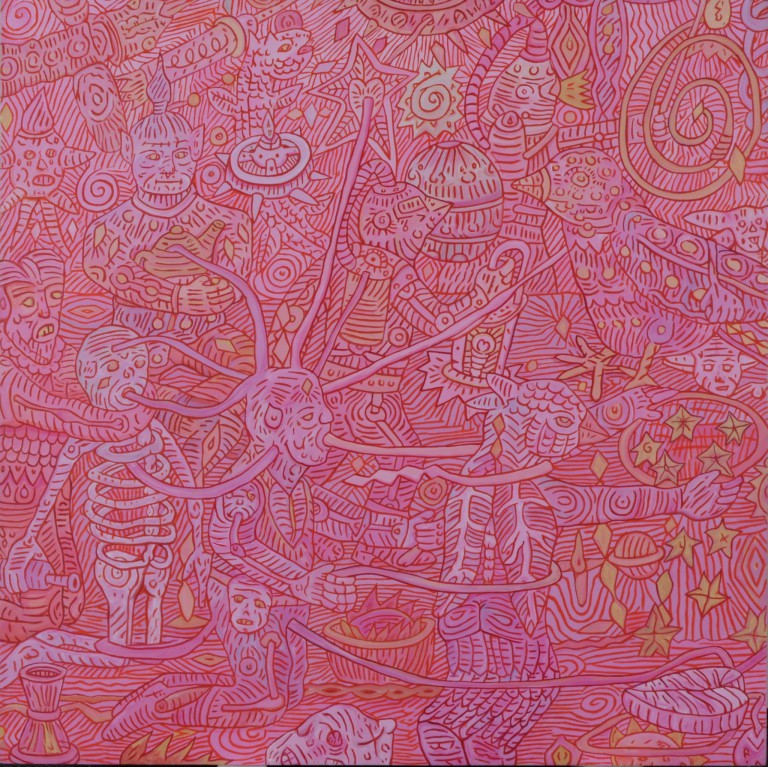 London, Ontario-based artist Kim Moodie refers to the phenomenon of horror vacui—a strong aversion to empty spaces—in describing his works. Looking at the teeming surface of Pink (1998) it is easy to see why. Whether working on a large or small scale, Moodie fills virtually every centimetre of his surfaces with intricately-wrought figures, animal and vegetal forms, and objects that sometimes, but not always, have real-world counterparts. His images seem to suggest narratives that are just beyond the viewer’s grasp. Evoking the macabre vignettes of 15th-century Dutch artist Hieronymus Bosch—or perhaps the grotesque figures imagined by early cartographers—the writhing figures are never still, pushing the action forward to an end the viewer will neither know nor understand. In doing so, Moodie strives to convey “a feeling of insatiable melancholy, a sense that something intangible is lost in so much.”1 For Moodie, this feeling is rampant in a popular culture-driven society that continually offers up, only to recycle, empty out, or repurpose, the symbols that once held meaning and power to whole communities.

Moodie received an MFA at Montreal’s ConcordiaUniversity and an Honours BA at the University of Western Ontario, where he now teaches. Adept at printmaking, drawing and painting, he moves effortlessly between media. He also devotes his energies to curatorial projects within Canada and internationally. Kim Moodie, Artist’s Statement, http://www.uwo.ca/visarts/about/facultypages/moodie_k.html.

Reading both the forest and the trees with Kim Moodie from LondonFuse on Vimeo.