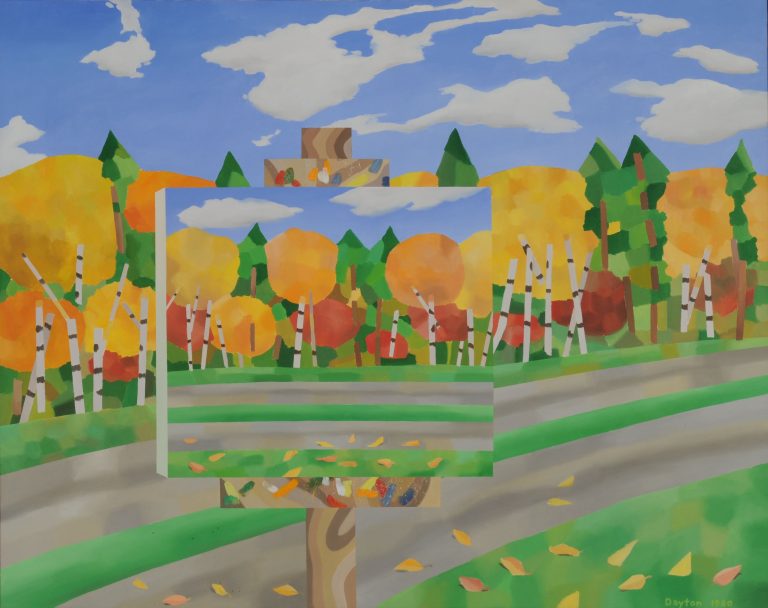 Landscape Painting within a Landscape

Landscape Painting within a Landscape

New York-born native Alan Dayton was a student at the University of California when thousands of American youths were drafted to fight in the Vietnam War. Faced with the choice of moving to Canada to escape the draft or “going into the army or prison or pretending [he] was psychotic,”1 Dayton moved first to Montreal, then Toronto. He finally settled in London, Ontario, after seeing a Jack Chambers retrospective at the Art Gallery of Ontario in 1974. Said Dayton of his new home: “London is a great resource for an artist. A greater artist could do even more with less but the human pageant is all here.”2

With its layers of mimesis, Landscape Painting within a Landscape resembles the witty and destabilizing paintings of Surrealist painter René Magritte (1898-1967).  But in its tone and subject matter, it could not be further from the majority of works in Dayton’s oeuvre. For he was, above all, a portraitist who felt it essential to build a relationship with his subjects in order to depict them truthfully. All walks of life became his collaborators: from homeless citizens to mayors, octogenarians to youths.

Dayton produced his most sustained response to the landscape late in his career, after spending about a decade away from London. He contributed to The River Project, an ambitious venture in which 19 London artists were invited to create work inspired by the ThamesRiver. Interestingly, Dayton’s work combined landscape with portraiture: four mixed media panels portraying, through collage and portraiture, diverse people who live by the Thames. In locating people in his landscapes, Dayton again paid his respects to the “human pageant” that never ceased to fascinate him.

1 – 3.  See pp. 133-5 of The river project: 19 London artists turn to the Thames / with text by Herman Goodden and an opening essay by Michael Baker. http://www.londonartists.ca/riverproject/book.php