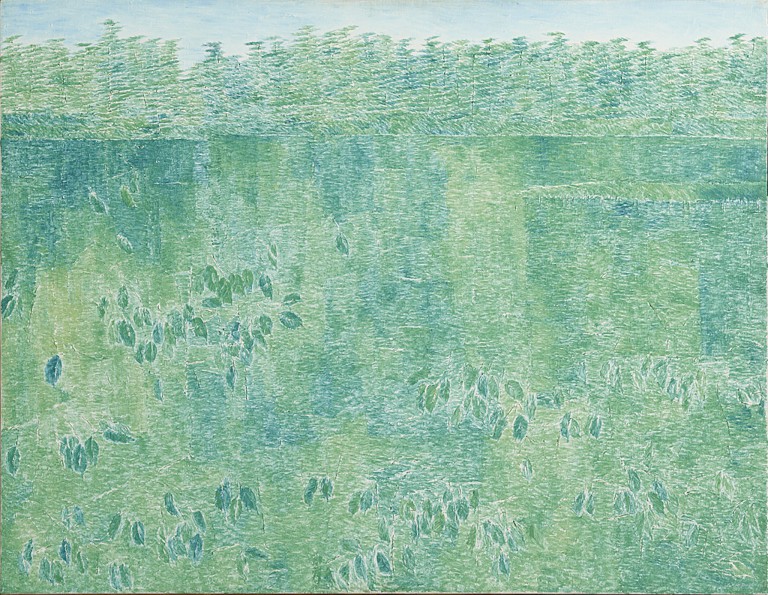 Born in Vancouver in 1922, Kazuo Nakamura did not begin his formal art training until he was in his twenties, attending Toronto’s CentralTechnicalSchool between 1948 and 1951. During his formative teenage years, he had experienced the devastating impact of Japan’s entry into World War II: like thousands of other Japanese Canadians, he was branded a potential enemy of Canada and sent to an internment camp in the B.C. interior.

Both a sculptor and a painter, Nakamura had a lifelong fascination with nature, science, and mathematics, and sought to convey their complex and often surprising intersections. When he joined the Painters Eleven in 1953, these interests distinguished him from his colleagues: rather than exploring automatic painting and the creative potential of abstraction for its own sake, he created meditative works that examined the world through mathematical formulae or scientific theories that required intense manual labour to create. Lakeside, Summer Morning, completed a year after the Painters Eleven had disbanded, demonstrates Nakamura’s careful balance of representation and abstraction. Here, the whole and the part—the tree and the leaf, the field and blade of grass—are elements of a highly ordered system that requires meticulous manipulation of paint and brush. These recognizable studies of nature later gave way to paintings whose ties to nature are less immediately apparent and infinitely more complex. In Nakamura’s words, such later works examine “the linkage of form to numerical structure,” which, in doing so, “may give some key to form and design in nature.”1