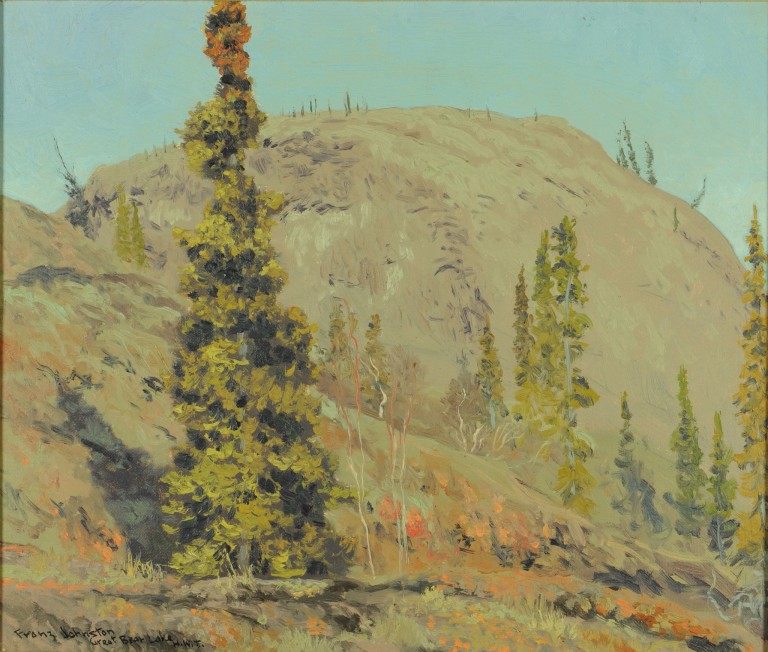 The paintings Radium Strike, Labine Point, Great Bear Lake, N.W.T. and Gibraltar, Eldorado, Great Bear Lake, N.W.T. (Northwest Territories) are the result of a six-month trip that Franz Johnston made in 1939. The trip was funded by the Eldorado Mining and Refining Company, which had invited A.Y. Jackson to sketch there the previous year. (Jackson returned twice: in 1949 and 1959.)

Unlike Jackson’s 1938 paintings Radium Mine, Great Bear Lake and Radium Mine, Johnston’s two paintings show no presence of mining activity. With a controlled brush that is sometimes gently impressionistic, at other times realistic, Johnston depicts pristine landscapes bathed in golden light. He makes no association between mining and either human or ecological damage.

History tells another, chilling tale: in the 1940s and 50s, Eldorado’s mine would become a key but silent player in the nuclear arms race. It was nationalized to produce ore for the Manhattan Project, which in turn produced the first atomic bombs.

Toronto-born Franz Johnston was an original member of the Group of Seven. He had joined Lawren Harris and others on sketching trips to Algoma in 1918 and 1919, producing inspired landscapes that featured in the Group’s inaugural exhibition in 1920.

Johnston left the Group in 1921, becoming principal of the Winnipeg School of Art (a position L.L. FitzGerald would hold from 1929 to 1947). He maintained a lifelong interest in landscape painting, but bristled at painting that seemed too “modern”1 for his taste. Able to work quickly, he gained broad exposure by mounting large exhibitions of his work in department stores and other nontraditional venues.