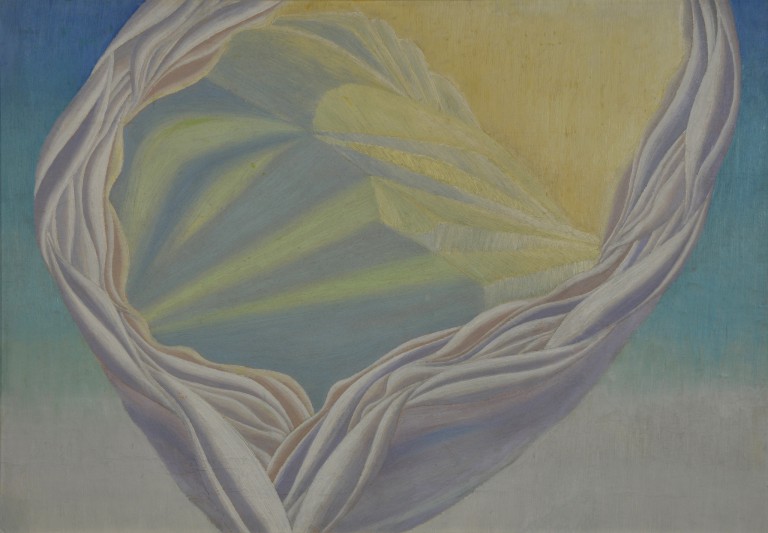 English-born Bertram Brooker, a self-taught artist who left school at age 12, began experimenting with painting after meeting the Group of Seven in the early 1920s. An advertising executive, journalist and editor, Brooker echoed the challenge issued by the Group to create a new way of painting in Canada. Like Group member Lawren Harris, he was also deeply influenced by the writings and paintings of the Russian artist Wassily Kandinsky, whose book Concerning the Spiritual in Art (1910) upheld music as an ideal vehicle for expressing spiritual ideas, perceptual experiences, and the biology of life. For Brooker, as for Kandinsky, abstraction seemed a necessary choice. How else to convey “the colour, the volume and the rhythm . . . experienced while listening to music”?2

In Abstraction, Music, Brooker does not fully embrace pure geometry. Around a glowing golden and blue centre containing curving and radiating forms is a perimeter suggesting billowing mauve-pink fabric. The effect is almost surrealistic, evoking the illogical images of dreams that artists such as André Breton and Salvador Dali were concurrently exploring in Europe.

In 1927, Brooker became one of the first Canadian artists to exhibit non-representational painting. He also exhibited his abstractions at a Group of Seven show in 1928 before moving away from non-representational art altogether. Interestingly, it was his meeting with Lemoine FitzGerald in 1929 (before FitzGerald joined the Group of Seven) that inspired this transition. By the time he helped found the Canadian Group of Painters in 1933, Brooker was fully committed to painting the human form and still life compositions.